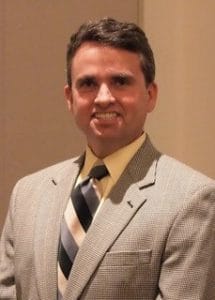 You could imagine what it might be like if just today someone invented the concept of a hospital. Imagine no one has ever seen, heard of, or experienced anything like a hospital and suddenly one opens. There would probably be fear, anxiety, happiness, and a sense of security among many people. Governments would try to react to pronounced fears among citizens. Some partners of the new entity would likely want to adapt to help or supplement the new hospital’s work.

It sounds like a far-fetched exercise, but for child advocacy centers whose whole movement started just thirty years ago, this is still a reality. In the mid-to-late 1990’s, as the child-first model expanded to more locations nationally legal issues arose. Often well-meaning partners had demands that defied the logic of the fledgling movement.

Andrew Agatston was thrust into this changing world in 1998. “I was working in a law firm as a trial lawyer in Marietta, Georgia, and I came home one day and my wife “voluntold” me I was the new attorney for the Safe Path Child Advocacy Center.” That’s when Agatston started digging into the issues surrounding CACs, the law, differing state frameworks for abuse protection and realized training and skills were inadequate almost universally.

“I found out then there were no lawyers specializing in representing CACs. It concerned me because of all the sensitive information that CACs have on their properties,” said Agatston. “Issues related to confidentiality of records are significant,” he says, “It’s important to show citizens and beneficiaries of CACs that there is a structure in place.”

Agatston points to the hypothetical example of a small CAC in a neat little house in a small community. “At any time they may have a case with partners from the US Department of Justice to prosecution and local sheriff’s deputies,” he says. “For a small CAC in a small community, they may receive a subpoena about a case and they may read it as a demand, but there’s no one there to say they can challenge it,” says Agatston. “They may even struggle to find a lawyer in some communities,” he says.

As a movement, Agatston, who is now serving as the CEO of Georgia Child Advocacy Centers, says “We’re not where we need to be, legally.” That’s why he started a small, weekly email distribution in 1998 that today serves what he calls “Legal Eagles”. The emails, curated by Agatston, highlight cases and court opinions around the country that impact CACs, their multidisciplinary team members, and how they operate. Roughly 1,000 people subscribe to the list today.

Agatston also started speaking around the country about legal issues impacting CACs and offering training seminars adapted to local state frameworks. Agatston is bringing his “CACs and the Law” workshop to Indiana at the end of May for a one-day event. The workshops cover material on how legal standards line up with National Children’s Alliance accreditation standards, how to be a “Super Witness”, and more.

“Being a Super Witness is about making sure the fears, concerns, and needs of a witness in court are done before they walk through the courtroom doors. We’re not graded on a curve in a courtroom. Once a witness goes in they have to focus on the most important people in the courtroom: the jurors. Jurors are lay people. If they weren’t they’d probably be struck off the jury list. Super Witnesses have to understand what it’s like to be in their shoes. They may have expected a car accident and instead it’s three counts of aggravated child molestation. Super Witnesses have to expect what it feels like to hear that for the first time,” says Agatston.

On the topic of standards, Agatston notes, “There are ten standards for NCA Accreditation, and none of them are legal.” Agatston says one of his main focuses is to make sure CACs at least consider those NCA standards plus some additional legal ones to be considerate of. Record keeping and what dictates the release of those records are one example, along with what process is followed when a child discloses abuse. Which by the nature of a CAC’s work is a common practice.

“These trainings are not here to tell people what to do, it’s just to show people what the landscape is as we look at cases and statutes,” says Agatston. He hopes that with increased awareness it can lead to a positive change where it’s needed. “Locally [in Georgia], we had legislation two sessions ago that related to confidentiality of forensic interviewing. In Georgia, like elsewhere, these recorded interviews get passed out to folks like litigants and people who otherwise shouldn’t have their hands on them. We created a rulebook for what happens when a lawyer or the public wants forensic interviews directly from a CAC. That formed the template for the legislation that passed and it’s been wonderful.”

To learn more or sign up for Agatston’s Legal Eagle email list, visit agatstonlaw.com. Learn more about the training event and how to register.